Former Super Eagles midfielder Wilson Oruma has suffered a mental breakdown after losing N1.2bn in a phony oil business. Oruma, who played alongside JJ Okocha and Kanu suffered a mental disorder six years after the incident and is currently a shadow of himself. More sad is the fact that, his ex wife introduced him to the fraudster clergyman who defrauded him of the hefty amount and also misled him into working with him. She later divorced him.
His close friend, Emakpor Dibofun told Complete Sports that: “Wilson Oruma hasn’t really recovered from the emotional disorder which he suffered after he was duped. He has been to several places in search of a lasting solution, but it gets worse after a bit of improvement,” he said.

In the wake of the report, Super Eagles legends, Augustine Eguavoen, Samson Siasia and Nwankwo Kanu, have reportedly agreed to organise a fun-raising match to aid the recovery of their former teammate.The game has been proposed to hold in Lagos in February.

Ex Nigerian International and former Chairman of Lagos State Football Association, Waidi Akanni, also revealed that a delegation will be sent to meet with Oruma’s family to know how they can help him fully recover. 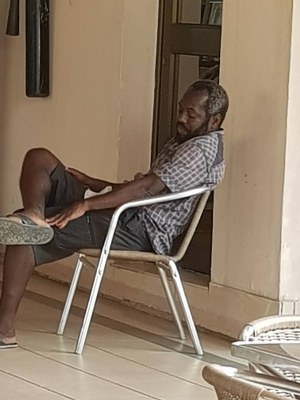 “Since the news broke that he (Oruma) had a relapse of an emotional disorder, his former teammates having been trying to reach out to people around him to show love to him, Taribo, Kanu and some of the Atlanta 96 set are keen to turn out for their former teammate.They have all agreed to reach out to his family to see how they can help him out and also use the opportunity to educate the current players on how to plan their future after retirement. I’m sure other players who will be contacted later will be willing to take part just as the Lagos State government and the Delta State government, where Oruma hails from.”

41 year-old Oruma laced his boots for RC Lens, Nancy, Samsunspor, Nimes, Servette, Sochaux, Marseille and Guingamp, and Kavala FC of Greece before he retired at the age of 33 on November 26, 2010. The midfielder also featured for Nigeria’s U-17, U-23 and the senior national team winning the FIFA U-17 World Cup in 1993, the Olympic gold in 1996 and two bronze medals at the African Cup of Nations in 2002 and 2006.

Previous ArticleStephanie Linus Arrives Italy To Advocate Against Human TraffickingNext ArticleOpinion: Benue Killings And The Other Issues | By: Wole Aguda