The Confederation of African Football (CAF) have unveiled the three finalists for the 2017 African Player of the Year award and sadly Nigeria/Chelsea’s Victor Moses didn’t make the cut. The final shortlist features: Mohamed Salah (Egypt/Liverpool), Pierre-Emerick Aubameyang (Gabon/Borussia Dortmund) and Sadio Mane (Senegal/Liverpool)
Egypt’s Mohammed Salah, who was recently adjudged BBC Africa Footballer of the Year is the huge favourite to win the award. The 25 year-old’s performances for both club and country in this campaign has been nothing short of stellar and his role in ensuring the Pharaohs book a spot in the 2018 World Cup (since 1990) can never be ignored. The former Chelsea man has netted a total of 20 goals for Liverpool this season; the first premier league player to achieve that in all competitions this season. 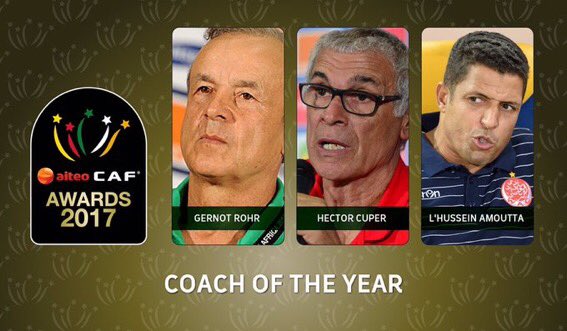 CAF Coach of the Year shortlist includes Super Eagles manager Genort Rohr, Egypt’s national team coach Hector Cuper and  L’Hussein Amoutta of Casablanca
The winner will be announced at a ceremony in Accra on 4th January 2018.