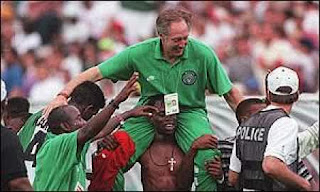 Former Super Eagles coach, Bonfrere Jo in a recent interview revealed that embattled Super Eagles coach, Samson Siasia having failed to display his tactical ability in his team thus losing the Guinea game only shows that he cannot handle the national team well.

The China-based ex-coach however suggested former Super Eagles captain, Sunday Olisey as a suitable replacement if the Nigeria Football Federation doesn't want to give him a second chance.

"Nigeria is blessed with talented players but this current set of players lack discipline on and off the pitch and they need a coach that can handle them well. Siasia tried to do it off the pitch, but it backfired on the field of play.

"In 2000 when I was in charge, I had a great team that paraded one of the best attacks at the Nations Cup, but we lost in the final match after coming back from two goals down. Nigerians saw the kind of efforts the team put in and they decided to give me a second chance, but these current Eagles did not play as if something was at stake. So they should decide on his fate now,"

Previous ArticleDAY 1 PICTURES OF THE MTN LAGOS FASHION&DESIGN WEEK 2011.Next ArticleMEET THE 2011 NEXT MOVIE STAR CONTESTANTS