Spain have sacked manager Julen Lopetegui just one day before the start of the 2018 World Cup.
Lopetegui was announced as Zinedine Zidane‘s successor at Real Madrid and will resume duty immediately after the World Cup. The president of the Spanish FA (RFEF) Luis Rubiales revealed that he was not informed of Lopetegui’s new role, he only heard about Madrid’s impending appointment five minutes before the official announcement.
Rubiales told reporters at a press conference in Krasnodar. “We have been forced to dispense with the national coach. We wish him the best of luck. What the Spanish team achieves, will have to do with the work he has developed. The negotiation has happened without any information to the RFEF, just five minutes before the press release. There is a way of acting that must be fulfilled. We have to work on a series of decisions that come two days before the beginning of the World Cup. There is a lot to do.
“I do not feel betrayed. Lopetegui, while he has been with us, has done an impeccable job. [However], this has been done without knowledge of the RFEF. We will touch the staff as little as possible, as soon as we have something to communicate, we will do it. I have a very close relationship with the players, as with Julen, it’s a very complex situation, the most complex one I could find. 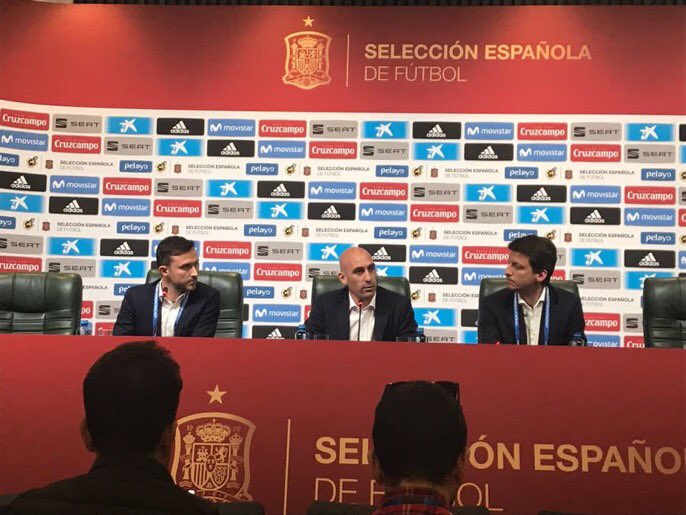 “We are in a very complicated situation, but the players and the new coaching staff will do everything in their power to take the team as far as possible. The Spanish national team is the team of the Spanish. You cannot do things this way, two or three days before the World Cup. We have been forced to make this decision.
“I admire Julen a lot, I respect him a lot, I think he’s a top trainer and that makes it more difficult to make the decision. I’m sure this will, over time, make us stronger. I know it’s a very difficult situation, I know there’s going to be criticism whatever I do, but the values ​​of the RFEF are set by the RFEF itself. We cannot remain on the sidelines of a negotiation of one of its workers and find out five minutes before the issuance of a statement. We have been forced to act.
“The team will do everything to get the best results, we cannot talk about hypothesis, but the RFEF cannot find out five minutes before it becomes public. In the RFEF we cannot not fulfil our own values. It is a difficult and painful situation, we would have liked to finish here with Julen at the top, but we have not determined the way we act.”
Lopetegui was unbeaten in his 20 matches as Spain boss, having succeeded Vicente del Bosque following the team’s exit from Euro 2016. Spain sporting director Fernando Hierro and Under-21 coach Albert Celades will take charge of Spain at the tournament.