Afropop/Soul singer is set to feature in Kunle Afolayan’s new movie titled Mokalik. The announcement was made by the award-winning actor, alongside a picture of himself and Simi, captioned:
“It is Official: Simi @symplysimi is featuring in “Mokalik” a Kunle Afolayan film. ‘Jamb Questiom’ crooner, Simisola Ogunleye, aka Simi, has accepted a role in Kunle Afolayan’s coming film, ‘Mokalik’ (Mechanic). The agreement was formalised on Sunday, at the filmmaker’s office, in Lagos.”
The film also stars the likes of Femi Adebayo, Ayo Adesanya, Faithia Williams, Lateef Oladimeji to mention a few.

‘Mokalik’ (Mechanic) follows the career of an 11-year-old boy, Jaiye, from the middle-class suburbs who spends the day as a lowly apprentice at a mechanic workshop in order to view life from the other side of the tracks. Simi will be playing the role of the daughter of a cafeteria owner.
Afolayan says ‘Mokalik’ is a slight departure from the flicks he had shot in the past, adding that there will be two versions of the film; one for the Nigerian market – the other for the international market. 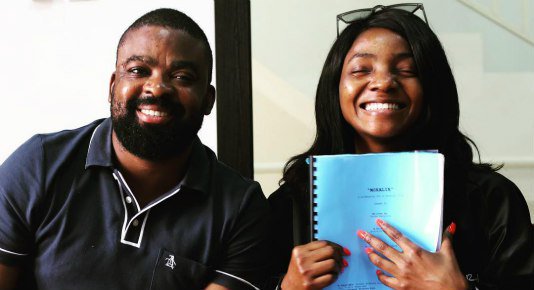 Screen-played by Tunde Babalola, inspiration for the story, according to the filmmaker came during his constant visit to the mechanic workshop where he refurbished his much publicised Vintage car (Thunderbird Ford 1965) recently, while the film title, a Yoruba corrupt pronunciation of mechanic is from a scene in one of his late father (Ade Love)’s classic, ‘Taxi Driver’. Visiting the mechanic workshop after about 15 years opened my eyes to a lot of things that I believe the world should know about our local auto car repairs industry,” he said.
“@Kunleafo and a girl with a script she likes very much,” The JAMB Question crooner wrote on instagram.