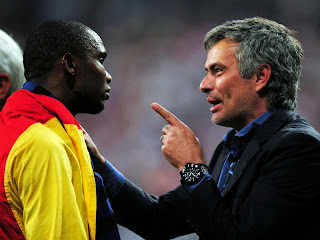 You can never understand Eto’o. One minute he’s ballistic the other minute he’s something else. Months after he labelled his former boss, Jose Mourinho a “fool” and a “puppet” for making comments regarding his age, the newly-signed Everton striker has thanked the Portuguese Manager for integrating him into the Premier League.
The Cameroonian international told reporters, “The only thing I have to say about Jose Mourinho is to thank him. It’s down to him that I had the opportunity to be accepted and integrated into the Premier League and I want to thank him for that. I’m not particularly concerned that it’s against my [old] team [on Saturday]. The important thing is to integrate into my new team-mates’ way of playing and get ready for that match. If I don’t feature it’s just important to get ready.”
Previous ArticleCount down to Carol Meets Runway 2014 | 6 powerful choir groups| 6 exquisite designers | 1 Venue | This ChristmasNext ArticleSinger, Jeremiah Gyang gushes about wife on 4th wedding anniversary