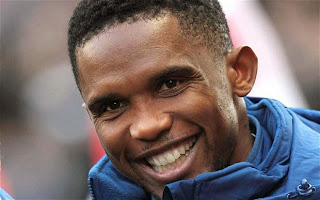 And the stars keep pulling the plug. Everton striker, Samuel Eto’o has called it quits on his international football career. The Cameroonian who made his debut at the 1998 World Cup at the age of 17 made the announcement on his official twitter page.

“I inform you that I am ending my international career. Thank you to all Africa, and to all my fans for your unconditional support.” The former chelsea player wrote.
During his career in Cameroon, the 33-year-old won gold at the 2000 Olympics and two Africa Cup of Nations titles in 2000 and 2002. He also participated in the Brazil World Cup 20014 and was excluded from Cameroon’s AFCON 2015 squad list.
Previous ArticleHollywood power couple, Brad Pitt And Angelina Jolie finally tie the knot (Photos)Next ArticlePresident Goodluck Jonathan launches new 2-in-1 national e-ID card. (Photos)