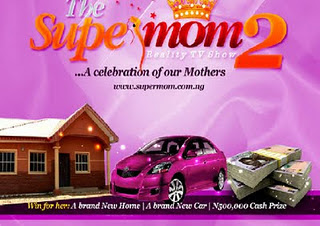 Founded on jaw dropping true-life stories, the Supermom show aired consecutively for the past 10 weeks has made a big statement on television. The tear-jerker which is now a choice programme has been a channel of lessons and eye-opening experience to millions of followers.

Broadcast at 9pm on the Nigerian Television Authority and African Independent Television stations on Saturdays and Sundays respectively, it boasts of influential sponsors like Procter&Gamble, Promasidor and Dufil foods; makers of Ariel detergent, Onga seasoning and Indomie Noodles.

The first episode was devoted to a review of the maiden edition and a recap of promotional activities for the new season. However, to spark off participation from viewers, two interesting sub-segments were introduced. The first, ‘Hug for Mama’ compels viewers to snap a picture of themselves and their mothers in an emotional hug to a designated email address and stand a chance to win N50, 000.

On the Celebrity Supermom segment, awesome stories of celebrities whose mothers have been instrumental to their success are shortly narrated. Stories of artistes like Psquare, Wasiu Alabi, Clarence Peters, Taye Taiwo have added glamour to the show.

Also, entertainment icons like Joseph Benjamin, Tiwa Savage, Waje, Femi Adeyinka, Halima Abubakar have as a matter of custom been a host on each episode of the show.

The stories in episodes two to eleven have been quite enthralling. The storylines though poles different are thematically similar as acute poverty, struggle, pain and hardship remain the order of the day. Driven by their labour-ward experience which often comes to recall, they have gone through thick and thin to make their children a remarkable success. With no atom of support from their husbands or relatives, from the sale of their personal effects, to working on people’s farms to pay school fees, they’ve managed to sail through murky waters.

These are women who according to Sola Fajobi, Executive Director, Digital Interactive Media, do not look like they can lift a stone but have performed heroic deeds for their children. As in the case of  Mrs Aishat Adedeji, a 58 year old trader featured on the 6th episode who took the pains of backing her son to and fro school when he became paralyzed and hinged on seeing her child walk, took him to a sheu in a distant village, even when her husband withdrew financial support, she worked on people’s farms, begged to pay for local medicine and also to survive. With the child strapped to her back, she decided to trek miles home, a good Samaritan however came to her rescue when the stress unhinged her mind.

Adedeji’s sacrifices are one in a million and such that have a profound effect on her children. Rather than get a pat in the back, their far-reaching efforts have been deemed unappreciated by their husbands who later abandon them for other women or in rare cases die untimely.

Asides been preoccupied with their children’s well-being, they look beyond their humiliation and run from pillar to post for their husbands. On the eight episode, Sidikat Kareem, a Lagos-based trader asides hawking pepper and cleaning people’s houses became a transit beggar to bail her husband from the hospital. She spent all her income paying bills and procuring drugs for him. One her way home one night, she was waylaid, beaten blue black and had all her money taken. Inspite of all these, she sought other survival means. Indeed, a mother’s heart is a patchwork of love.

There is an instinct in a woman to love most her own child and an instinct to make any child who needs her love, her own. This maxim best explains the decision of Folajogun Adesona a 61 year-old trader and a competitor on the tenth episode to adopt two additional children despite having eight to cater for. When her husband died, her unfriendly inlaws denied her access to her husband’s property, forced her to withdraw her children from private to public schools. The once happy family wallowed in poverty, she had to engaged herself in all sorts of jobs to survive. She sold fruits, firewood, became a bricklayer, sold cooked food and many more.

With all these harrowing experiences, one would hardly believe that their meagre income sponsored their children through university. As viewers continue to vote for their favourite mothers who will make it to the final stage, at the 12th episode mothers who have qualified since the inception of the show will be granted a private broadcast. Three mothers will be shortlisted and viewers would inturn vote for the mother who deserves to be the next Supermom.