Actress, Toyin Aimakhu’s ex-lover, Seun Egbegbe was allegedly caught and beaten up this morning after he tried to run away with brand new  iPhones he  stole from a shop at the computer village, in  Lagos. Below is a report from PorscheClassy.

According an eyewitness,  Egbegbe came inside Computer village with some guys in a jeep around 10:30am pretending that he wanted to buy 7 iPhone 6s and 2 iPhone 7 mobile phones. Egbegbe, went into the phone store ‘Kaalcech Innovations and Consultancy’ located on number 9 medical road, computer village, Ikeja and requested for nine iPhones, he pretended to be ready for payment after the phones were delivered to him only for him to elope into the waiting cab before the the sales girl screamed for help. The noise which attracted sympathizers, helped as they gave Egbegbe a hot chase and eventually caught up with him before he could find his way out of computer village.

The angry mob pounced on him and gave him the beating of his life before the store’s MD, Mr Kolawole Aleshinloye quickly informed the police who came and whisked him away to Area F Police station where he’s currently been detained. 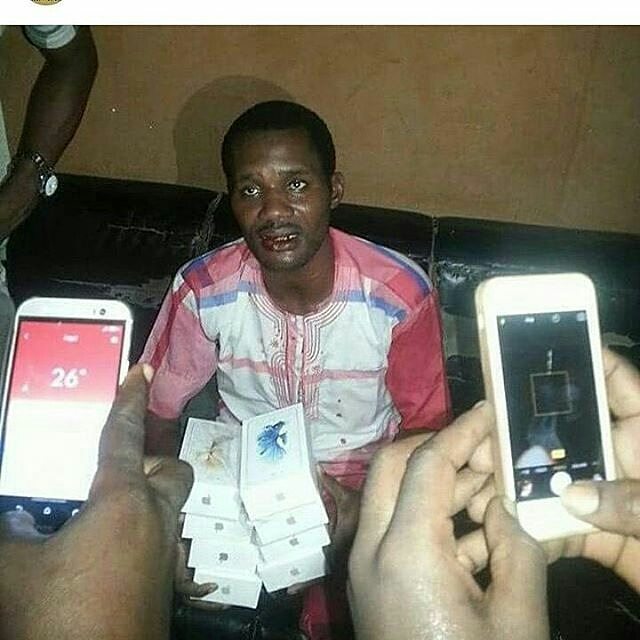 Prior to this bizarre incident, Seun Egbegbe claimed to be a movie maker, and even threatened his ex lover Toyin Aimakhu that he would make sure no movie maker employed her, before friends intervened and helped them settle the matter amicably.

This is so ridiculous, I’m thinking it is a scene from an upcoming movie or something like that.It has to be!

Previous ArticleZlatan Ibrahimovic named Sweden's best player for the 10th time in a row.Next ArticleFive-man shortlist for 2016 African Player of the Year unveiled.