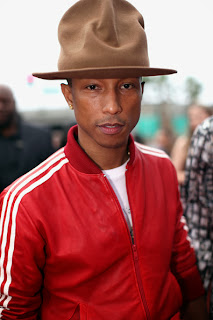 Things we do for charity! Else who would part with $44,100 bucks for a mere hat? The Vivienne Westwood oversized hat Pharrell Williams wore during the 2014 Grammys has been auctioned on eBay. The buyer; Arby’s, a fast food chain company in America bought it for that whooping amount. Proceeds are going to ‘From One Hand To Another’; a charity organization set up by the singer whose mission is to “Change the world one kid at a time by giving them the tools and resources to meet their unique potential”.
“Thank you to whoever bought my Grammy hat on @eBay for $44,100. Your donation benefits From One Hand To AnOTHER.” Pharrell wrote.
Previous ArticleRecently-unveiled Super Eagles jersey to be investigatedNext ArticlePhoto of the day: Young Rihanna, C Ronaldo, Kim Kardashian and David Beckham