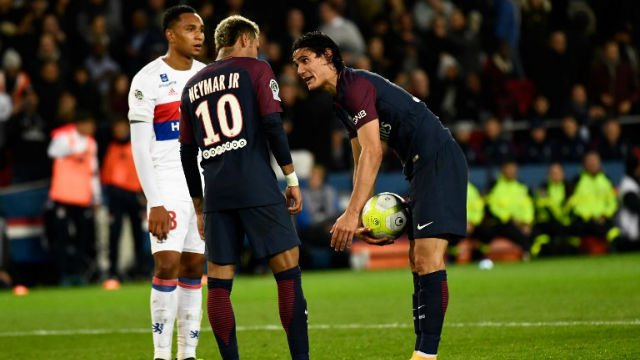 A few minutes before that, Cavani had tried to take a free kick but Dani Alves took the ball and gave it to the former Barcelona star, unfortunately, Cavani’s 79th minute strike was saved by Lyon’s Anthony Lopes.  Neymar’s action drew ire from football fans, with many claiming he was being disrespectful to a club legend, others applauded his move, adding that he is more valuable to the club and should not play the second fiddle.
Interestingly, Neymar reportedly unfollowed Cavani on instagram after the incident.
See our top reactions below.

Cavani can bully Neymar out of penalties all he wants, but if this tension continues, Neymar will be bullying him out of the club.

Dani Alves and Neymar so disrespectful and childish, Cavani is a club legend have some respect you just got here

No matter how Neymar and Alves are talented, Cavani already is a legend in Paris, they can't just arrive and erase the last 5 years #PSGOL

If Cavani wants to continue playing at PSG he must accept Neymar is the King.

Egos clashing between Neymar & Cavani at PSG proves how massive Messi is — not just as a football player, but as a person.

Neymar:"I want to take the penalty!" Cavani: "do I look like Messi" .😂https://t.co/lRTghtMq8t

Am sure Cavani is still pissed that Neymar was part of the team that demolished them 6:1 and here he is dragging setpiece with him.

Neymar must have forgotten he was no longer at Barca..
He should be the playmaker now and not at the receiving end.

I wonder when he will learn the hard fact, give it to Neymar or face the sack, cos I'm sure the quatar owners will never back Cavani

Previous ArticleNigeria – Now That The Recession Is Over, What Next? | By: Bukola OgunyemiNext ArticleRooney Fined And Handed Driving Ban For Drink-Driving