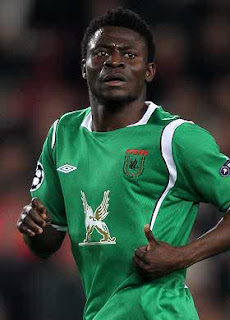 In honour of his mother and brother who passed on in 2008 and 2011 respectively, Super Eagles striker, Obafemi Martins, visited and donated gifts to a Russian orphanage, orictoritak on Saturday, 12th November 2011.
The Rubin Kazan player who promised to visit Nigerian orphanages in December and also set up a foundation in honour of his late brother lauded the performance of the Super Eagles in the match against Botswana.
The 27 year-old winger enjoined Nigerians to be patient with the new Super Eagles coach, Steven Keshi as well as believe in the team whom he said has great strikers. He however promised to score for Steven Keshi if given the opportunity.
Source: Complete Sports