On Tuesday, the National Bureau of Statistics gave a lot of Nigerians the news they desperately wished to hear – Nigeria is out of recession. After five consecutive quarters of negative GDP growth that started in Q1 2016, Nigeria’s economy grew by 0.55% in Q2 2017. Predictably, data once again became the hero and villain in a long-running social media battle of bias between the supporters of Nigeria’s President, Muhammadu Buhari, and his critics.

The optics of sneaking out of a 15-month recession apart, a 0.55% year-on-year GDP growth is hardly anything to cheer for Africa’s biggest economy. But as the NBS data reveals, the Q2 2017 growth is an improvement, even if marginal, on the GDP performance recorded in the preceding quarter (-0.91%) and the corresponding quarter of 2016 (-1.49%). Beyond the numbers, however, questions persist about the long-term economic recovery prospects of the nation. Questions that demand that all post-recession celebrations be suspended until further notice.

27 months into the Buhari administration, the patience of the Nigerian masses on the state of the economy and general standard of living is wearing thin, and understandably so. Inflation rate dropped for the fifth consecutive month in July, but the prices of goods and consumables which skyrocketed during the recession remain exorbitantly high. In reality, the recession persists for the economically dis-advantaged demographic of Nigeria’s 170 million population.
Nigeria’s path out of recession is lined with commendable efforts in improving the ease of doing business through the Presidential Enabling Business Council (PEBEC). Chaired by the Vice President, Yemi Osinbajo. the Council implemented a 60-day National Action Plan on Ease of Doing Business and was able to tackle some of the critical bottlenecks and bureaucratic constraints that had hitherto defined the ordeal of doing business in Nigeria.
Osinbajo, who assumed the role of Acting President while President Buhari was away in the United Kingdom on medical leave, issued executive orders on port operations heralding a much-needed improvement in the operational efficiency of the nation’s airports and seaports. He also signed two critical bills on improving access to credit, a major stumbling block for businesses in Nigeria. As the NBS data released yesterday show, Nigeria came out of recession the same quarter the implementation of these reforms started. 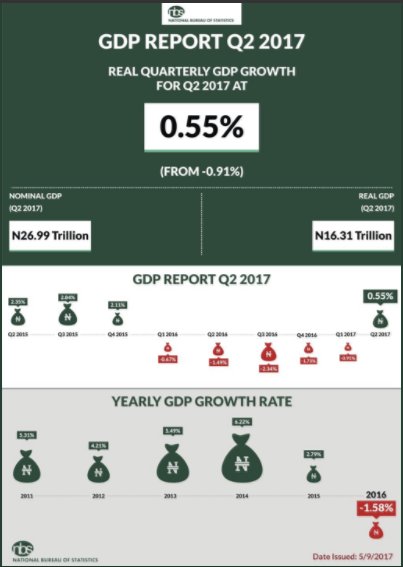 The recession has also proved pivotal to Nigeria’s drive for revenue diversification and a rebalancing of the economy’s over-reliance on the oil sector. The Federal Inland Revenue Service (FIRS) for example recently revealed it generated N2.11 trillion as revenue in the first six months of 2017 and is on course to meet the N4.94 trillion revenue projection for the year. Similarly, the Nigerian Customs Service generated N486 billion as revenue in the first half of the year, surpassing the N385 billion generated for the same period in 2016.
On the part of the Nigerian Ports Authority, reforms like the implementation of a Revenue and Invoice Management System has gone a long way in blocking revenue leakages and improving ports operations through the exclusion of unnecessary human interface in doing business at the ports. As a result of this and other reforms, the agency was able to surpass the N16 billion revenue projection for the first quarter of 2017, raking in N118 billion.
Progressive reforms in the monetary policy of the Central Bank of Nigeria, notably the introduction in April of a special foreign exchange window for investors and exporters have been instrumental in the journey out of recession and its sustenance is important for further economic recovery. The special forex window grossed about $2.2 billion of trade in the first six weeks of its introduction and its impact on the market capitalization of Nigerian Stock Exchange – which jumped from N8.748 trillion in April to N11.463 trillion in July – is undeniable.
All these notwithstanding, the perennial issues of corruption, public sector bureaucracy and the high cost of running government remains. The duplicitous arrangement of line items in Nigeria’s 2017 budget berates hope of its ability to shape any lasting change in the life of the common man. Businesses still face the hurdle of multiple taxations coupled with the obdurate challenges of power and bad roads.
A good number of Nigeria’s 36 states are broke, largely dependent on monthly revenue hand-outs from the federal government. The bulk of these monthly federal allocations, in turn, go into servicing the salaries of civil servants with little or nothing left for the execution of capital projects and provision of social amenities. Yet some of these states offered subsidies for religious pilgrimages this year alone up to the tune of N50 billion.
President Muhammadu Buhari, whose campaign was built around his anti-corruption stance, has set about recovering funds looted under past administrations with resounding success. Critics, however, berate the former dictator for unlooking the corruption going on within his own administration. It took some weeks longer than necessary for President Buhari to suspend a high-ranking member of his government after he had been indicted for tampering with funds allotted for the care of those displaced by Boko Haram insurgency.
With the negative impression of an economy in a recession now dispensed with, the Nigerian government must keep its focus on providing an enabling environment to attract more investment and for businesses to thrive. Talks, for example, of reviving the defunct national airline, should take into consideration the huge drain on public revenue that South Africa’s romance with the same venture has been.