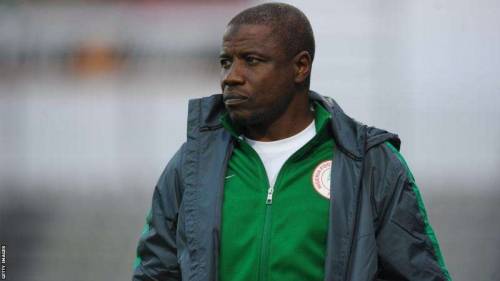 The Nigeria Football Federation have handed Salisu Yusuf a year ban from all football activities and fined him $5000 after he was found guilty of receiving a bribe to select players.
The Super Eagles assistant coach was filmed collecting $1000 by undercover journalists posing as agents. Following thorough investigation into the incident, the country’s football governing body directed the 56 year-old to pay a fine of $5,000 to the Federation within three months, and asked him to stay away from football-related activities.
“The NFF Committee on Ethics and Fair Play have placed a one–year ban from all football-related activities on Super Eagles’ Chief Coach, Mr. Salisu Yusuf.”

“Following its consideration of a complaint by the NFF as well as the Coach’s defence of a video documentary in which he was seen to accept the sum of $1,000 from an undercover reporter posing as a player’s agent. The coach must also pay a fine in the sum of $5,000 to the Federation within three months.” A statement from the NFF Ethics Committee read.