Movie Title: Mentally
Genre: Comedy
Year Of Release: 2017
Cast: Frank Donga, Erick Didie, Toyin Abraham, Jude Chukwuka, Charles Okagbue, Etinosa Idemudia, Woli Arole
Special Appearances: James Abinibi, Patience Lawal
Director: James Abinibi
“Mentally” is a movie set in contemporary Lagos. It tells the story of a man named Akin (Donga), who decides to leave his rural dwelling for the city of Lagos, much to his mother’s dismay. He is ushered in by his friend Emeka (Didie), but gets a classic welcome gift when he has to pay for prayers from a prophet (Aroli), and is relieved of his transport fare by a pickpocket. Emeka takes Akin to a local restaurant, where the former is able to avoid paying for their meals by conning the owner of the place.
Later in the day, Emeka introduces Akin to his friends, whom he regularly supplies marijuana. They taunt Akin on account of his dress sense, but persuade him to smoke with them. Akin ultimately caves in to the pressure, sucks in some of the marijuana, and gets transported into a unique mind experience.
The first thing to note in this movie is that Adekunle Gold has got really good acting chops. He successfully pulled off his role as a bus conductor, and if his music career ever derails, he should consider a stint behind the silver screen…in a different, role, at least. Frank Donga’s facial expressions are priceless too; they have always been a crucial part of his comedy routine, and they add life to the movie.
Also Read: Movie Review: My Wife And I 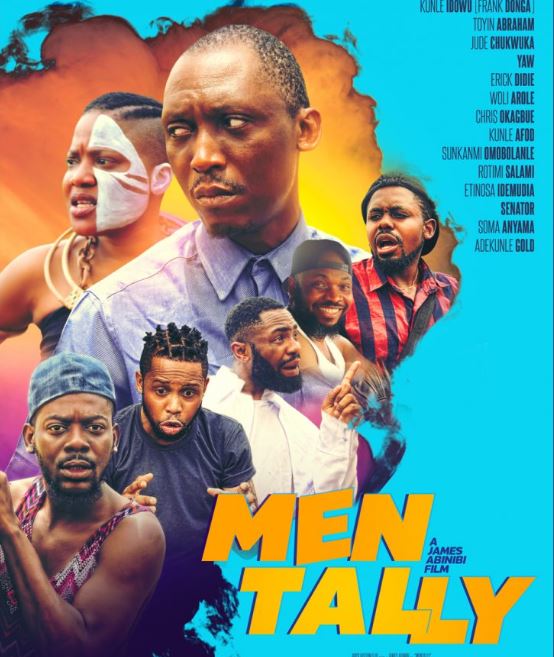 Erick Didie’s attempt at humour is 50-50, but he is by no means a bad actor. The part where an intoxicated Donga attempts to dab and do the shakiti-bobo makes for genuine laughing too, and the cinematography is top notch, even if there was a glitch at the restaurant scene. Toyin Abraham gives a good account of herself, and while Etinosa Idemudia has upgraded from being just an Instagram comedian, her part in this movie was, to put it simply, needless.
Also Read:  Movie Review: The Women
“Mentally” reeks of a plot and acting sequence which have too many gaping holes. How do people in a primitive village averse to civilisation have attachments and braids on? How do a “strange” people get around to speaking bits of Hausa and Yoruba? There is also the question of how a supposedly backward village gets to have their leader watching the English Premier League on a television without a wall socket, but I guess that can be explained by the “spirit” of the marijuana Donga’s character smoked. The dialogue is slow, the transition in scenes are pretty bad, and the fact that most of the action is a post-marijuana reverie is the only thing that saves this clip from being a horrible movie.
The movie ends in a manner that leaves you with thoughts along the lines of “Ok, we get it, marijuana is bad, and then, what next?” The message is good, and the humour is somewhat passable, but it could have been better executed, and for every ten people at the cinema, five would probably feel hard done by.
Rating: 5.9/10

Jerry Chiemeke is a lawyer and freelance writer who lives in Lagos. An amateur photographer and sports enthusiast as well, Jerry’s works have appeared on Blanck Digital, Elsieisy, Oshodi.tv, The Kalahari Review and Brittle Paper. He is the author of ‘The Colours In These Leaves’. Get the book here
You can follow him on Twitter @J_Chiemeke, and also check out his craft on his blog at pensofchi.com