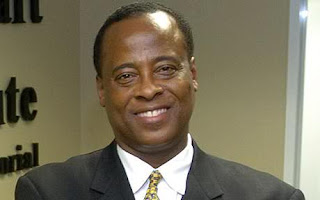 A jury of seven men and five women in Los Angeles has found Conrad Murray, late Michael Jackson's doctor whose trial began september 8, 2011 guilty of involuntary manslaughter in the death of the King of Pop.

58 year-old Murray who was portrayed as an incompetent doctor who used the anesthetic propofol without adequate safeguards and whose neglect left Jackson abandoned as he lay dying will be sentenced on November 29, to four years imprisonment and could also lose his medical license.

He pleaded not guilty adding that he had formed a close friendship with Jackson, never meant to harm him and couldn't explain why he died.

The decision however sparked off jubilation amongst the late singer's fans who had gathered outside with signs and T-shirts demanding, "Justice for Michael,"

He has been remanded into custody.