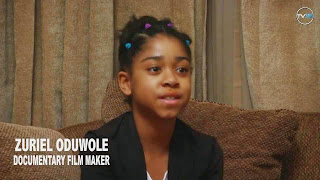 She's such a remarkable young girl. At age 10, Zuriel Elise Oduwole's boldness is unbelievable. Known for interviewing renowned leaders and severally applauded for dishing out intelligent interview questions, the Whiz kid recently etched her name in history book as she became the youngest person ever to be interviewed in Forbes.

It was her turn to be interviewed and so she got featured in the August 2013 edition of Forbes Africa. Zurich however hopes to interview President Goodluck Jonathan when he’s less busy.