LaLiga has announced a 15-year partnership with Relevent, a multinational media, sports and entertainment group that will see clubs play regular season games in USA and Canada. The agreement states that at least one La Liga match will be played across the Atlantic, making it the first European league fixture to be played outside of the continent.
Speaking to reporters (via the Mirror), Relevent chairman Stephen Ross revealed his excitement about the deal.
“This extraordinary joint venture is the next giant leap in growing soccer’s popularity in North America. This unique relationship will create new opportunities for millions of North American soccer fans to experience the most passionate, exciting, and highest level of soccer in the world.”
The partnership will see the beginning of a new group called ‘LaLiga North America’ which aims to bring the two footballing cultures together ahead of the  Fifa World Cup 2026 in North America.
La Liga official statement regarding the agreement, states that “North America has exclusive rights and obligations to represent La Liga across the U.S and Canada in all business and development activities. Called LaLiga North America, the newly founded organization will work to cultivate soccer culture in the U.S and Canada using the unequalled assets of LaLiga, the world’s best soccer league featuring internationally recognized clubs and players. 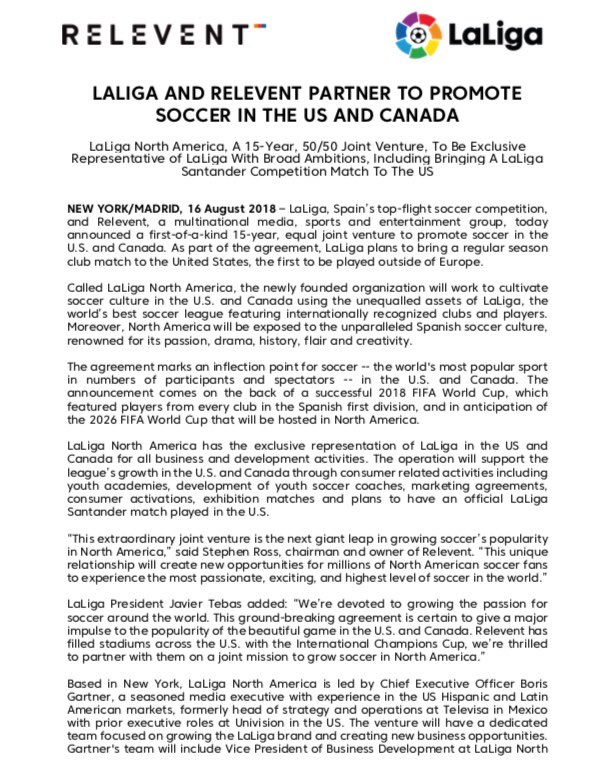 The Statement continued, “Moreover, North America will be exposed to the unparalleled Spanish soccer culture, renowned for its passion, drama, history, flair and creativity. The agreement marks an inflection point for soccer – the world’s most popular sport in numbers of participants and spectators – in the U.S and Canada. The announcement comes on the back of a successful 2018 Fifa World Cup, which featured players from every club in the Spanish first division, and in anticipation of the 2026 Fifa World Cup that will be hosted in North America.”
The dates and locations, as well as the teams involved are yet to be revealed but the Real Madrid and Barcelona is expected to be given priority. The 50-50 joint venture is a 15-year deal between La Liga and Relevent – who have been behind the International Champions Cup (ICC). The first game abroad is set take place this season.