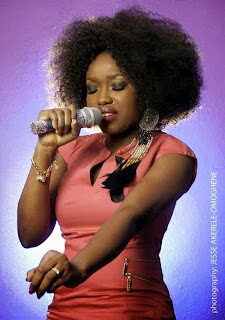 That people are yet to come to terms with the death of award-winning Gospel singer, Kefee Obareki Don-Momoh is like stating the obvious. One of such is her crew member who was with her the day before she collapsed.
“So sad, this has got to be one of the saddest moments in my life. She was on a flight from Los Angeles to Chicago, but she collapsed and was taken to a hospital in Las Vegas. She died in Vegas but she didn’t die of pregnancy complications.  I was with her the day before she collapsed. She had been in Los Angeles already. She performed at Gospel Faith Mission House of Testimony on Sunday.

The next day, Monday, she was shooting a music video in Hollywood, CA. I was one of her camera guys. She seemed fine that day, and I could see nothing wrong with her at all. She was happy, smiling, dancing, laughing and enjoying herself.

There was a whole crew and we spent the entire day shooting the video. The next day, she was supposed to board a plane to Chicago for what I believe was either another concert or another video shoot, I’m not exactly sure but as she boarded the plane and they took off, she collapsed. The pilots were forced to land the plane in Las Vegas, Nevada and there she was taken to the hospital.

She’s been in a coma ever since and now this. She’s passed and my heart is heavy. I had so much fun shooting her video. And if you could see all the excitement was caused, you would be so happy. It is a sad moment indeed. I just can’t believe this. R.I.P. because you served the Lord well Kefee. R.I.P.”
Previous ArticleSilverbird Galleria presents 'ALUNA' (Let the Child live)Next ArticleBrazil 2014: Arjen Robben sets new record.