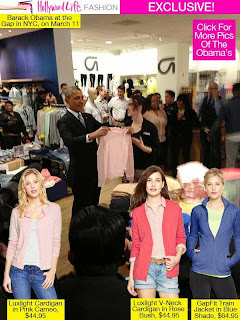 Humberto Anaya, the store’s general manager told Hollywoodlife that he was quite nice and very personable, (what was he expecting? Hostility?). “As nervous as I was– with all the activity coming up to the event—the second I shook his hand, that all went away. “One of my associates complimented him on his looks and he said ‘Did you get that on camera?’ It was really cute. He had great conversation with my associate around what the right items were to buy for his daughters and his wife.”

“Mr. Obama was very meticulous in his choices. For his wife, he bought a blue gapfit train jacket which retails for $64.95. For his bubbly teenage daughters, he bought two luxlight crewneck cardigans, (one in rose bush and the other in pink cameo). Both sweaters cost $44.95.”

Humberto also revealed that he was particular about the sizes of the items he picked. “He preferred to keep them in sweaters and tops and he didn’t want to buy anyone bottoms in the wrong size. He was more nervous that he’d get the wrong size in the bottom selection than anything else. I think he knows their taste well enough that they’d like the colors he picked.”

Previous ArticleJaywon and Kennis Music call it quitsNext ArticleOpinion: What Abacha’s son and Obesere should teach Nigerians | By: Fatai Ibrahim