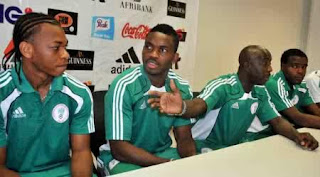 Though the exit of the Super Eagles from the 2012 Africa Cup of Nations as a result of the 2-2 draw with Guinea caused lots of pain to Nigerians, the players equally have moved on, they got to their hotel in Abuja and were paid about $150,000 (about N23m) promptly.

Their bonus for a win was $10,000 each and $5, 000 for a draw while the head coach Samson Siasia received double of that and his assistants and team doctor got $7,500 each while other support officials got the same amount as the players.

A breakdown of the amount paid the players and officials showed that Siasia received $10,000 his three assistants, physio and team doctor got $7,500 each while the 18 players dressed for the match got $5,000 same as about eight other back room staff of the Super Eagles.

The Chairman of the Nigerian Football Federation technical committee, Chris Green gave reasons why they paid such amount of money to a team that failed to qualify for AFCON, “They asked for it and we gave them since it is what we agreed to pay for drawn games. The situation was such that only the players and officials could say no to the bonus, knowing full well that the draw did not help the country’s quest to be at the Nations Cup.

“We shall have to review all this in future to check such happenings. We gave them all they needed to beat the Guineans but they disappointed Nigerians by failing to qualify. We have learnt our lesson and whoever will coach the team in future will not have his way without our output, in addition they were paid their allowances because they were scheduled to travel the next day to London to honour an international friendly match with Ghana.”