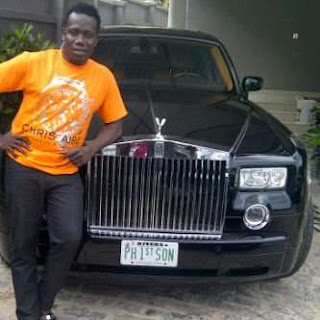 Let me begin by singing, Prince of Mo'Hits 's "it's a jonzing world". Anyways, thank God it's friday, I can afford to play and write anyhow and anything. En hen, so let's put play aside, sometime ago, not too-long sef, last week or so, I read about Duncan Mighty's 'new acquisition', a Rolls Royce. I didn't bat an eye-lid cos that seemed to be the latest trend amongst artistes now, after D'banj's Aston Martin and Jim Iyke 's i-cant-remember-the-name ride. So when his own car issue came on board, I just told God not to forget me o. Cos dem be people like me.
Seeing the story on newspaper headlines was a further confirmation BUT to my greatest surprise, PUNCH's story was entirely different. Before then, there had been speculations from different quarters that he borrowed it. I was like, bad belle people don come oo, leave this Port Harcourt based dude make hin enjoy hin ride before you use envy and jealousy kill unaselves.
As I was saying, when E-punch contacted him, he denied ever telling any media person about it and to cap it all, he just rented it for a video. As I read that phrase, my head turned 360 degrees. Where the hell did NET, VANGUARD and others get that gist from? Oh, the plate number? Eeya! What a unique jonzing technique. Its rather sad that people have started throwing tantrums at media and questioning our integrity. To be truthful, it isn't his fault if even PLAYBOY magazine wrote it, according to him, he didn't tell anybody he bought it so enough thanks to all who increased his popularity via google search engine. The mileage he received via that story has been huge.
Still on the revelation, the dude con vex me now now, after he politely explained issues, he lambasted Lagos-based artistes for being flamboyant. That one, I no dey dia and I must confess was really hard. Sincerely, that phrase might not go down well with them that's if they read today's PUNCH, but let's bone, if one person read story, 10 million people don read am. That to me was uncalled for. What he needs to explain is if he's nursing a beef abi how we wan take explain am.
His words, "I am not like Lagos-based artistes who go about bragging about what they have and what they do not have. I have been to D'banj's house but you need to come and see for yourself where I have erected in Port Harcourt, I don't live a fake life. I give back to the communities in my state, I give them boreholes, I give scholarships and I motivate youths. I have a construction company where I resume as a worker every morning but you won't hear me making any noise about my possessions because God has blessed me more than a Rolls royce". Hmmmmm! Muscian cum Philanthropist, If you don't blow your trumpet who else go blow am for you? We don see you.
Anyways, Duncan Mighty's bubble has been burst, yeah, I say this because the guy had been playing along. So people don't worry, the car will soon or might have been returned. Meanwhile he deserves a big 'abara' (hit) in the back for accepting diverse congratulatory messages from people who called. #verygoodsharpguy. Happy weekend people!