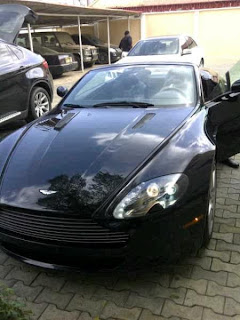 The other day, while strolling down twitter lane, I came across D’banj’s new Aston Martin DB7 Vantage car picture which according to diverse reports is valued for $200, 000. The other time the shoes he wore to the MTV awards was the cynosure of all eyes, dis time na car. But seriously, reports like this aint good for the heart.lol.

Person wey wake up still dey think wetin he wan chop no go cry when he read that kain story? These stories aint ear-friendly to the poor.

To make the ‘attack’ (cos it’s an attack on people’s brain) milder, it’s better to leave the figures in the Dollar state and never convert it to naira, because of headache. That’s when you hear Mamas inserting a bit of that good news when rebuking their children, “you no dey shame, u carry 5k gimme, no be your mate dey buy Aston Martin car”. U go fear comparison.

So the big question which often comes to recall is where do these artistes get money from? Jim Iyke flaunted his own car almost the same time. Some would say no be only music, no be to just sing for stage come down

So without anybody sending me message, cos I’ve listened to arguments which they don’t get paid for, oh D’banj did this, he did that to get the car. Na una sabi. All those stuffs won’t make the car disappear from his garage.

But seriously, don’t know if this happens to me only, such news often make you zoom into your present job, calculate your salary, close your eyes and for your mind feel like commanding your boss to increase your salary to 500k per month so you”ll be able to live a better life. If all these has happened to you, just chill en, e go better for you.

Now, after shoes and cars, I wan beg media make them no spotlight his shirt or trouser, if I hear that he buys one particular shirt for 8,000 pounds, hmmmm, you wouldn’t want to know what I will do ooo. Safe weekend people.