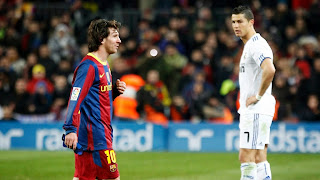 Both are world’s greatest footballers, break and create new records every now and then and have so much in common as far as soccer is concerned but really most people are interested in knowing the kind of relationship they have outside football.
Like, what they say when they run into to each other in a shopping mall (don’t think their paths cross that much), do they ever hang out (we know that’s not possible), exchange emails etc. Spanish newspaper, Marca caught up with the Cristiano Ronaldo and here’s what he said about his rivalry with his nemesis, Lionel Messi.

“It’s not at all true that we have a bad relationship. We are colleagues and have a professional relationship. We don’t have a relationship outside of football like I have with some other players. He tries to do his best for his club and national team and I do the same. There is a certain rivalry where we are each doing our utmost for our teams.

“This rivalry is part of my life. It is only normal that people compare us. The same happens in Formula 1 with Ferrari and Mercedes. I’m used to it. This has been the case not only since I joined Madrid, but already when I was still at Manchester United. I hope that we can both laugh about all this. Football is a game, it’s something fun and something we both like. We must face this rivalry in a positive way because it is a good thing. Football is something beautiful that all the fans enjoy.”
Previous ArticleSinger, Jeremiah Gyang gushes about wife on 4th wedding anniversaryNext ArticleHollywood power couple, Brad Pitt And Angelina Jolie finally tie the knot (Photos)