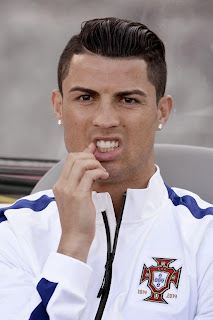 Real Madrid playmaker, Cristiano Ronaldo has been named UEFA’s Best Player in Europe. He piped out Bayern Munich duo, Arjen Robben and Manuel Neuer to win the prestigious award.
“I’m really, really happy. I have to say thank you to my team-mates, to my family, my friends. I don’t have this trophy in my museum – I’ll put it there straight away.”  Ronaldo said after receiving the award
The Portuguese forward scored a total of 17 goals in 11 European games, scored thrice as Madrid clinched the Copa del Rey,won the Champions League trophy with Real Madrid in the 2013/2014 season.
Previous ArticlePhoto: All Champions League groups this seasonNext ArticleSaviours? Can they rescue their teams? Di Maria and Balotelli cover the new issue of Four Four Two Magazine