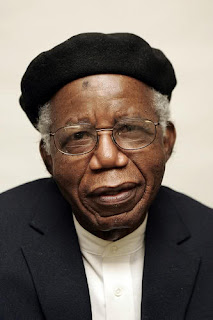 Celebrated literary icon, Professor Chinua Achebe through a message to the Nigerian ambassador to the US, Professor Ade Adefuye has declined the Commander of the Federal Republic (CFR) honour made by the Nigerian government.
According to Achebe who first rejected the offer in 2004, "The reasons for rejecting the offer when it was first made have not been addressed let alone solved. It is inappropriate to offer it again to me. I must therefore regretfully decline the offer again."
Achebe in year 2004 wrote thus to ex President Olusegun Obasanjo "I write this letter with a very heavy heart. For some time now I have watched events in Nigeria with alarm and dismay. I have watched particularly the chaos in my own state of Anambra where a small clique of renegades, openly boasting its connections in high places, seems determined to turn my homeland into a bankrupt and lawless fiefdom.  I am appalled by the brazenness of this clique and the silence, if not connivance, of the Presidency.
"Forty three years ago, at the first anniversary of Nigeria's independence I was given the first Nigerian National Trophy for Literature. In 1979, I received two further honors – the Nigerian National Order of Merit and the Order of the Federal Republic – and in 1999 the first National Creativity Award.
"I accepted all these honors fully aware that Nigeria was not perfect; but I had a strong belief that we would outgrow our shortcomings under leaders committed to uniting our diverse peoples.  Nigeria's condition today under your watch is, however, too dangerous for silence. I must register my disappointment and protest by declining to accept the high honor awarded me in the 2004 Honors List".