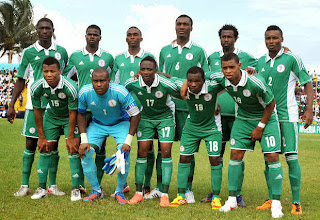 Thanks to Super Eagles’ smashing AFCON 2013 victory. Confederation of African football (CAF) has ranked Nigeria as top seeded team for the Morocco 2015 Orange African Cup of Nation qualifiers. Nigeria garnered a total of 39.5 points, Ghana and Ivory Coast had 38 and 36 respectively. Their automatic qualification will also see them leading other countries to the group stage qualifiers.

CAF’s criteria include the performance of the teams during the three last editions of the AFCON; qualifiers of those editions, and the qualifiers of the World Cup 2014. The qualifiers’ draw will be held Sunday, April 27th 2014 in Cairo, Egypt.

Top 21 teams listed in the CAF ranking will automatically qualify for the group phase which will be held from September 5th to November 19th 2014. The final phase’s draw shall be conducted on November 26th 2014 in Morocco. The 2015 AFCON will be played from 17th January – 7th February 2015.