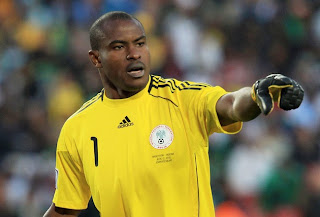 Seems Super Eagles skipper, Vincent Enyeama hasn’t gotten over Nigeria’s 2015 AFCON qualification failure or maybe he has but just baring his mind.
In an interview with SL10.ng, the 32 year-old who has been nominated for the CAF African player of the year and BBC African player of the year awards revealed that he is more concerned with team success than personal glory. He added that he”ll pick an AFCON qualification over winning CAF African Player of the year award.
“It’s not important to me and I’ve always been saying it because those are individual awards and if you ask me to choose, I would take the AFCON over the awards,”
He continued, “I really want to thank everyone that has been involved in making me get nominated and it’s a big honour for me as a Nigerian. It gives me pride and prestige and it would be great if we won it again and hopefully we will win it, but it’s about the team and not about me.”
‎
Previous ArticleChris Attoh and Damilola Adegbite christen their babyNext ArticleActress, Bukky Wright also joins political race.