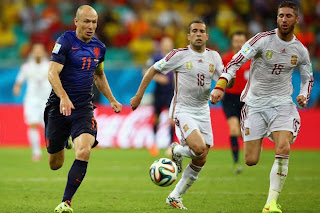 Asides the fact that his team has not done badly so far, Netherlands winger, Arjen Robben has added another achievement to his list. He is now the world’s fastest footballer. The Bayern Munich talisman achieved the feat in the ongoing World Cup tournament. Last friday, on June 13, 2014 to be precise, he recorded a speed of 37km/h, the fastest ever clocked by a footballer during his team’s clash against Spain.

The record was previously held by Arsenal’s Theo Walcott who ran a recorded speed of 35.7km/h sometime in September 2010. The 25 year-old England player however congratulated him on twitter, “Robben, Congrats for beating my clocked speed but thought it looked a bit downhill. #SpeedMatters”.

Top 8 fastest footballers in the world.