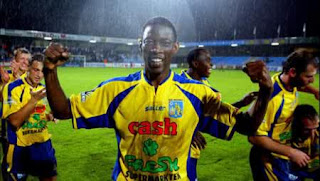 Bobsam Elejiko, Nigerian defender, slumped and died on sunday 13th November in Belgium during a match involving his club Merksem and Kaart.
Though the cause of his death is yet to be publicized but the Lagos-born former Stores of Lagos player who had also played in some belgian clubs like Turnhout, Royal Antwerp and Deinze had always been nursing a heart problem.
Before his death, it was reported that he had gone through series of medical tests which certified him fit thereafter. May his gentle soul rest in peace.Source: Complete Sports