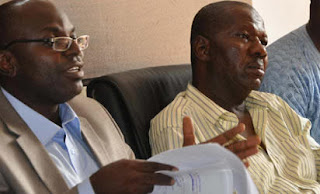 The maxism, "It isn't over, until it is over" best describes the case between actor cum comedian, Babatunde Omidina popularly called Babasuwe and the National Drug Law Enforcement Agency. In a recent press conference, on November 14 to be precise, Bamidele Aturu, Counsel to Babasuwe avowed to fight the abuse of his client's fundamental rights by officials of the National Drug Law Enforcement Agency.
During the interactive session, Babe Suwe affirmed that he had never been arrested for carrying drugs in Nigeria or outside Nigeria, "when I travel, I don't stay more than two weeks, which you can see on my passport." He added. He also revealed that he excreted 25 times while in custody.
Aturu who questioned NDLEA's integrity and their obsolete scanning machines also enjoined the Federal Government to check their activities.
He pointed out that "The October 28, 2011 report contradicted the earlier one, which said that his stomach showed no foreign body seen within it. This is not a Baba Suwe's fight, but a fight to bring the narcotic agency to questioning on how they carry out their scanning.
It is a fight against the abuse of the peoples' fundamental rights. In other countries, where people respect the law and have proper perspective of what they do, nobody would allow people to be detained, humiliated and refused access to even his lawyer until some days after going to court." He stated.