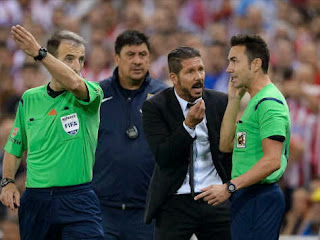 Quite lengthy! Spanish Football Federation (RFEF) has slammed Atletico Madrid head coach, Diego Simeone with a total ban of eight matches following his conduct during the Supercopa de Espana clash with Real Madrid, two days ago. He’s also expected to pay a fine of€4,805.
The former Argentine international was sent off after 25minutes into the first half following heated exchanges with match officials on the touchline, he also patted the fourth official on the head and applauded the referee before moving to the stands. 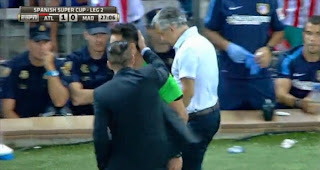 The RFEF confirmed in an official statement that the 44 year-old has received a two-game ban for excessive protests over a decision, a four-game ban for striking the fourth official and two additional one-game suspensions for applauding the referee before continuing to remonstrate from the stands.
He however has 10 days to appeal against the sanction.
Previous ArticleDone deal! Mario Balotelli completes Liverpool move, poses with Jersey No. 45 (Photo)Next ArticleDoris Simeon, Joseph Benjamin, Oge Okoye, others nominated for 2014 Zulu African Film Academy Awards (ZAFAA)