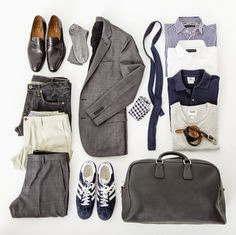 As a man, your wardrobe is largely dependent on what you do for a living. This is due to the fact that either your career path or your vocation determines your choice of clothes. One doesn’t expect an engineer and a bank clerk to dress the same way or even boast of the same assortment of clothes.
Nevertheless, there are basic elements that should be found in every man’s wardrobe since we all attend events and find ourselves in contexts that have no regard for career or vocation.
Each of such events or occasions demands a particular style of dressing, and deviating from such pattern could make one appear awkward. Here is a list of minimum requirements for a man’s wardrobe:
1. One suit
Occasions like cocktail and dinner parties, special dates, official presentations and similar outings often require formal dressing. A suit comes in handy at such times. If you don’t possess one, your wardrobe is not complete.
2. Four sets of ties
Wardrobe consultants insist on four sets of ties with different styles. You should have two neckties and two bow ties with different designs. The neckties are for formal occasions while bow ties are for semi-formal and informal occasions.
3. Casual footwear
A pair of casual shoes is what you need for informal dressing. For instance, when you go on traditional attires, you need casual shoes to go with the dressing. When you put on beach wears, you also need to complement them with casual shoes.
4. A white shirt
Every man needs at least one white shirt. Whether worn alone or worn with a suit, white shirt enhances your appearance. It is also suitable for most official and formal meetings.
5. A beach wear
A beach wear doesn’t necessarily speak of what you put on while going to the beach. While that could be an option, a beach wear for a man could also serve as a relaxation wear – clothing that you put on when you’re off-duty. There is no hard and fast rule about this but it is advisable you put on something which makes you free and at the same time fashionable.
6. One traditional attire
This might not be applicable to everyone. However, most parts of the world have traditional apparels that are associated with their particular culture. You should have at least one of such attires in your wardrobe for traditional functions and other occasions that require traditional dressing.
7. Seven singlets and boxers
Your underwears are a vital necessity and they speak volumes when it comes to personal hygiene. A piece of underwear shouldn’t be worn more than once before it is washed; so a man is supposed to have at least seven units of underwear – one to cater for each day of the week.
‎
Now that you know these basic elements, you would do well to pay attention to your wardrobe and get it in proper shape.
Credit: Benneth Njoku/ valourdigest.com
Previous ArticlePhotos: Rapper, Olamide launches Baddo Tees.Next ArticleAmbode or Agbaje? Watch 'The Truth' on The battle for Lagos.