Opinion: Tinubu and the burden of morality | By: Samue Ajayi 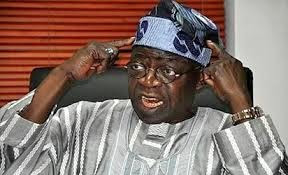 I watched the AIT documentary on APC National Leader (I still wonder what that office is for) Senator Bola Ahmed Tinubu and two things emerged: I learnt NOTHING and also learnt SOMETHING.
First, I was aware of the primitive acquisition by the politician. So it was nothing. It was the magnitude of the acquisition that shocked me. That was something.
However, let us assume that ONLY HALF of those ‘allegations’ are true, it is height of immorality and obscene abuse office. Imagine this: how many former governors are still occupying former houses originally owned by the state government, both valued at N1.1b?
The house, according to the documentary, at 5 Oyinkan Abayomi, VI, was owned by Lagos state government but has been ‘ceded’ to Tinubu as retirement benefit. Same for the house he lives in at Bourdillon. If it was a former PDP governor that did this and APC came in, would they not have revoked such crazy arrangement?
What of some shocking acquisition of lands, properties and then the mind boggling activities of Alpha Beta and Hitech Construction milking Lagos dry? Like I said, we knew these things. It was their magnitude that shocked someone like me. Having said this, this is exactly where my grouse with APC is.
They keep shouting change but YOU CAN NEVER CURE ME OF AN AILMENT THAT IS RAVAGING YOUR OWN BODY. PDP is stealing us blind. Jonathan is being attacked mainly on his inability to fight corruption.
He is allowing his friends and Niger Deltane to fleeze us. But those attacking him are much worse in every aspect. Or what is Tinubu doing differently?
They are grabbing and grabbing as if tomorrow will be no more. Haba! Lai Mohammed met with some select editors recently and admitted to them that Tinubu and Amaechi are the major sponsors of Buhari. How can this saint Buhari be claiming to be change agent to help us kill corruption with these two men as his financiers?
Their major vocation in the last 15 years was being state governors.
The rumor is flying around that the federal government wants to ground the APC presidential campaign by freezing the account of Tinubu and Amaechi; a direct admission of these two being rich enough to fund a presidential campaign.
WHERE DID THEY GET THE MONEY? WHAT MORAL RIGHT TO ACCUSE ANOTHER ONE OF CORRUPTION? I used to think only saints are in APC! But hypocrisy is APC’s number one disease.
Finally, I learnt Tinubu is threatening to sue AIT. He won’t be short of SANs to help him. Eight of them did when Conduct Bureau charged him.
Apart from legal fees, they all got a brand new Toyota Camry 2013 model. I knew the day that brand new Toyota Camry 2013 model were delivered to the office of a prominent Human rights activist.
EIGHT units of that car were bought same day each valued at N8m then. Their cocoa don ripe again. Only this time, it is empty threat! He CANNOT.
Those who did research on that documentary have their facts. He has petitioned the National Broadcasting Commission, NBC. That is a face saving move. But court? I pray he does.
Then he will know the limit of propaganda; especially using the media to ACCUSE SOMEONE OF WHAT IS YOUR OWN WAY OF LIFE.
Credit: Opinionriver.com