Hilarious moments at The Headies 2014 | By: Lanre Odukoya 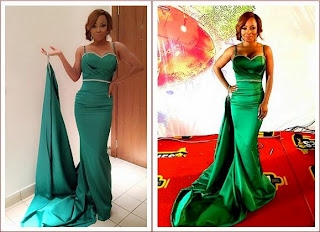 Nigeria’s most prestigious music award ceremony, The Headies held last Sunday amid fanfare. It left us some hilarious memories and here are the characters that made the soiree a really riveting one.

TOKE MAKINWA
On-air-personality Toke Makinwa and comedian Bovi Ugboma were supposed to anchor the show together, but for whatever reason, Bovi was absent. So, Bright Okpocha a.k.a Basketmouth stood in for him for a while. At some intervals, Toke Makinwa was left to engage the massive audience alone.
The task was so overwhelming that your darling V-logger was caught gasping for breath. She changed her outfits five times before the show ended. And the most disastrous for her was a moment when she stepped on stage in a jumpsuit that made her look almost like a clown. Whatever she had underneath looked so much like a diaper on an adult.
The audience couldn’t hold back the laughter provoked by her look, but the unsuspecting lady thought she was getting a sincere cheer. She was the wrong person for the job apparently.

BETWEEN SALAWA ABENI AND VICTOR UWAIFO
It might interest you to know that Waka queen, Salawa Abeni and Pa Victor Uwaifo made it to the award ceremony that would ordinarily look like one for today’s artistes. Abeni had spotted Uwaifo and made to exchange pleasantries with the septuagenarian.
For a few seconds, Uwaifo struggled to recognise Abeni until the latter repeatedly mentioned her name and perhaps, her former husband’s, Kollington Ayinla. How time flies.

KCEE
Singer, KCee’s Limpopo won the Song of the Year category. He came on stage to celebrate that victory with a live band to perform the song, Pull Over on stage.
With super theatrics, he charmed all especially with Saka and other comic dancers performing live, but he flawed the outing with his voice that sounded off beat throughout the performance. You’d almost be forced to ask, “did this guy rehearse at all?”

K1 AND PASUMA
Fuji musicians, K1 the Ultimate and Pasuma Wonder are in a lingering feud. Though, they appear to be keeping their cool, there are indications that highlight the existence of some rancour. They were both guests at the award ceremony.
Pasuma was on stage to present an award, as if it was intended to prove a point, the camera zoomed in on K1 where he was seated and the acclaimed King of Fuji wore a look that screamed rage. The fight isn’t over yet, obviously.

AYIRI EMAMI
Ayiri Emami, the Warri billionaire graced the show. As he walked past, he was asked by a curious team of journalists if
he was going to give Tayo Faniran (the Nigerian representative at the recent Big Brother Africa) $350,000 as has been
widely circulated. “I don talk am” was all he said as he walked past without responding to other questions

Brazil knocked out of Copa America

What Ronaldo can do, his son can do better.