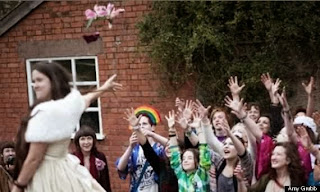 How do you marry yourself? Is that even possible? Well, Grace Gelder, the happy bride of Grace Gelder has an answer to that question? So, after 6 years of being single (6 years? some have spent 2 decades), she decided to marry herself.

She built up a brilliant relationship with herself, committed herself to aperiod of self discovery”, then November last year, she went to Parliament Hill in London, proposed to herself and announced it to the world. Of course a wedding ceremony with 50 guests in attendance followed. And as for the “wedding” kiss, it was sorted out with the aid of a mirror.
She told a journalist with The Guardian:
“Obviously, if you’ve just announced you’re marrying yourself, it is plainly a statement of self-love, and I was under no illusion how self-indulgent that might appear. But I was completely comfortable with my motivations.”

She was also told by friends that she’s an example to women.

“Why not an example to men too? I really don’t see it as any kind of feminist statement, but creating a wedding of this kind on my own terms felt incredibly empowering.” She added.

18 years after, Kudirat Abiola on my mind | By: Joe Igbokwe