Opinion: What does Osoba want? | By: Ibidapo Emmanuel 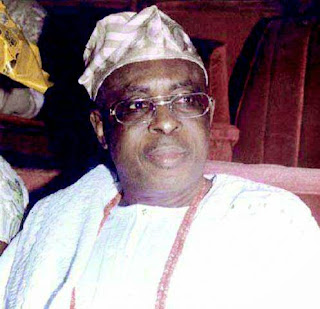 Life is full of paradoxes and as life goes on, we see all sorts daily. People change they say but the more things change, the more they remain the same. Here is to the curious case of Olusegun Osoba, a journalist and a former governor of Ogun State, South West Nigeria.
Osoba’s journalistic talent was first spotted by one of Nigeria’s early media icons, Alhaji Babatunde Jose who was then the Managing Director of Daily Times. Osoba had come into the Daily Times same time as Dipo Ajayi, and Femi Sonaike. Osoba rose to eventually become the Managing Director of Daily Times.
Described as a “reporter’s reporter”, Osoba enjoys across-board accolade from his peers, senior and junior associates. Peter Enahoro, who took over the role of editor from Alhaji Babatunde Jose, describes Osoba as a “star reporter” saying he remembered him “as a passionate, go-getting, indefatigable reporter with a sharp nose for news and luck of being at the right place at the right time”.

Osoba’s journey into politics began when he became the governor of Ogun State from January 1992 until November 1993. He was elected on the Social Democratic Party (SDP) platform, and was removed from office by the brutal administration of General Sani Abacha. After the return to democracy in 1999, he was elected again as governor on the Alliance For Democracy (AD) platform, holding office between May 1999 and May 2003. He lost his reelection bid in 2003 to Gbenga Daniel of the PDP.
Osoba lost his seat, like five others AD governors of the south west due to the political maneuvering by the former president, Olusegun Obasanjo, a man who doesn’t respect democratic tenets much. The PDP under Obasanjo’s presidency virtually steamrolled and bamboozled the governors elected under the defunct AD, using less than acceptable democratic means.

Out of job and no longer politically relevant in his home state of Ogun, Osoba sought refuge in Lagos under the former Governor Asiwaju Bola Ahmed Tinubu. Tinubu open handedly accepted him since they both belonged to the same party. He was rehabilitated and made relevant again and when the AD became AC before changing to the ACN, Osoba was given some national prominence again. But one curious thing to note was that even after the departure of Olusegun Obasanjo after the completion of his tenure as the president, Osoba still remained a personal non grata in his home state.
As the national leader of the then ACN, Osoba easily deferred to the Asiwaju as his leader, of course a hungry tummy doesn’t argue with whosoever bears the pot of porridge. But one thing that was conspicuous was the lack of political clout of Osoba in his home state of Ogun. He was more or less a paper weight politician who had no political value due to his extremely poor performance in about six years of two different politics terms. The people really could not pin point any meaningful achievement of Osoba and therefore could not see him as a worthy leader. The ACN eventually won back Ogun state from the PDP in 2011, but the victory was not attributable to Segun Osoba in any way.
But Osoba continued to tag along with and around Asiwaju Tinubu until the fortuitous birth of the APC. Shortly after then, Osoba began to angle for a more prominent position in the APC both nationally and in local Ogun state politics, but the APC knew Osoba’s relevance was limited to few newspaper pages and were not prepare to jeopardize the party’s acceptance nationally and in the local politics of Ogun state.

A leopard, they say never changes it spot. Students of Nigerian politics will remember how Osoba abandoned his SDP colleagues in the heady days of Abacha. He began to dilly dally with the maximum ruler. Clearly he hasn’t forgotten any of those leopard skills. As soon as he realised he wasn’t going to be able to hijack the APC machinery in Ogun state, he quickly pitched his tent with the PDP and President Jonathan. He became a fifth columnist.
Olusegun Osoba, is now a closet friend of the Peoples Democratic Party (PDP) and President Goodluck Jonathan, it has been revealed. Osoba is believed to have in the past several months being working against the interest of his party the All Progressives Congress (APC). Within that time, he has met clandestinely with a small clique within the APC towards recruiting them to be part of his game plan.

Osoba has chummy relationship with the leadership of the ruling PDP. Reliable sources confirmed that Osoba has made a few covert trips to the Presidential Villa in the past month. His present participation in the ongoing National Conference, in spite of his party, the APC, abstinence, further proves his disloyalty. Not only that, he became the self-appointed unofficial campaigner for the conference by advertising the conference and saying it is the solution to Nigeria’s problems. Osoba’s new found optimism is misplaced. His new posturing and political romance game makes him a dangerous politician to deal with.
Osoba, Tinubu and Bisi Akande have together weathered many storms and crossed many rivers. However it seems the waters are beginning to part. Osoba’ s new role is questionable. It is suspect and it is one that will lead him to the political wilderness.
It appears that Osoba, because he was able to dine with Abacha in those heady days, but was forgiven and allowed back into the progressive fold, is now embolden to tread that well worn path of eating his cake and still retaining it, but he will be wise to heed the saying, “once bitten, twice shy”. His current foray into the waters of infamy is poised to be his last swim of shame. He will be wise to retrace his faltering steps now or be lost forever in the abyss of political irrelevance.