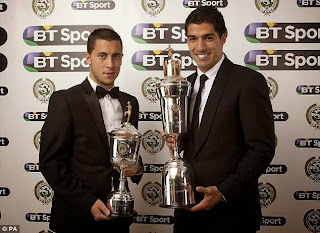 Liverpool’s Luis Suarez has been named PFA Player of the Year. Chelsea’s Hazard Eden also scooped the PFA Young Player of the Year award. The announcement was made last night, April 28, 2014.
The Uruguayan who has scored 30 Premier League goals this season said, “I always try my best for the team and it is nice to get awards but really this is for my team-mates and the staff at Liverpool because without their help I wouldn’t have this prize.”
PFA TEAM OF THE YEAR