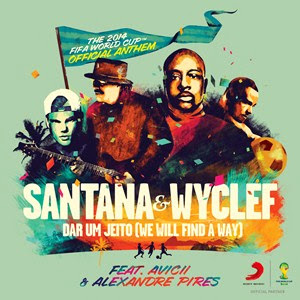 FIFA and Sony Music Entertainment recently announced that the official anthem of the 2014 FIFA World Cup will be recorded by award-winning superstars; Wyclef Jean, Carlos Santana Avicii and Alexandre Pires. Titled, “Dar um Jeito (We Will Find A Way)”, the song which will be released this month will be performed by the four artistes at the tournament’s closing ceremony in Rio de Janeiro on 13 July, 2014.
There are now four official songs for the tournament. The first was recorded by Pitbull, Jennifer Lopez and Claudia Leitte; there’s another Super-Song winning track to be recorded by Ricky Martin and the Official Mascot Song which was released in 2012 by Brazilian singer, Arlindo Cruz.
“It is an honour to take part in the 2014 FIFA World Cup and have “Dar um Jeito (We Will Find A Way”) selected as the Anthem. Along with my brothers, Wyclef, Avicii and Alexandre Pires, we look forward to performing the song in Rio de Janeiro in July and sharing this message of light and hope on the FIFA World Cup stage.” Carlos Santana stated.
FIFA’s Marketing Director, Thierry Weil also noted that, “It is great to see another impressive group of artistes join the official music programme of the 2014 FIFA World Cup. FIFA and Sony have been working hard in developing an album that brings the sounds of Brazil to life through a variety of creative tracks. Santana, Wyclef, Avicii and Alexandre Pires are true musical icons and I am thrilled they will be part of the 2014 FIFA World Cup closing ceremony.”

” I have never concealed anything” – Cristiano Ronaldo releases statement after appearing in court.

We controlled, except the goal – Guardiola

Ronaldinho tricked us into believing he was joining Real Madrid – Iniesta