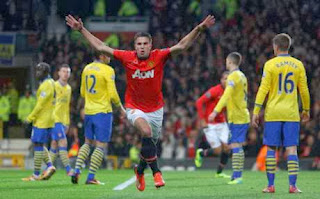 Oh dear! Of course people tie their money, mobile phones and probably cars down to football betting but a whole house? That's huge. An Ugandan and his family members (3 wives and five children) were thrown out of his house by some Manchester United supporters after betting his house on the last Manchester United Vs Arsenal clash.

Henry Dhabasani, the Gunners fan opted to lose his two-bedroom house while his partner Rashid Yiga was more than willing to part with his new Toyota car if Arsenal won the match. Few hours after they picked witnesses in the neighbourhood and also put their betting in writing. Henry reportedly fainted after the final whistle was blown!