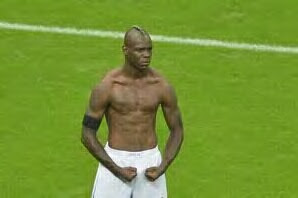 You remember this pose? This was when he scored against Germany in the Euro 2012 semi-final and now, Mario Balotelli wants this pose in a life-sized statue of himself. The Milan striker has engaged the services of a local artist to immortalize himself. He's going to keep the statue in his home.

According to the artist, "I presented several drawings but Mario wanted to be immortalised in a pose that shows him having scored a goal, highlighting his muscles and with an expression of defiance.

"I have imagined him as an athlete from ancient times and the statue will be a mix of classical and pop style in platinum and coloured bronze with the eyes made of stones."