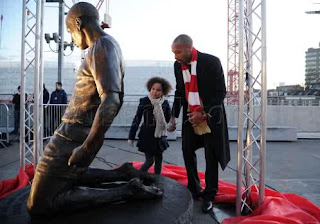 34 year old french footballer, Henry Thienry is fully set to rejoin his former club, Arsenal football club. The striker who after leaving Arsenal in 2007 went to Spain's Barcelona football club and then New York Red Bull has started training with the rest of the arsenal team.
Speaking on his return, Arsenal coach, Arsene Wenger stated that the club is happy to have him back adding that his reputation is not on the line.
"You can never take away from people what they have done, that will remain forever. Nobody expects him to be what he was 10 years ago, we just want him to help out."
"I think it is just credit to him to want to be helpful to a club that has given him so much. Therefore I feel there is no special pressure to be the player he was before."
"I believe our fans are happy that players who have done well for the club want to help out again. That is very positive," he said.
"We had that before and it shows that Arsenal have a special link with our players because we had Sol Campbell and Jens Lehmann who helped out for a while and did very well. Now we have Thierry. It is a continuity of the special link with our former players and they are all happy that Thierry is coming back, too. You can always learn in life from people who have the knowledge he has. That was one of the reasons why we brought Jens Lehmann and Sol Campbell back. They have a weight in the dressing room." He affirmed.

Look who are in school uniforms! Veteran thespians, Chiwetalu Agu and Ngozi Ezeonu