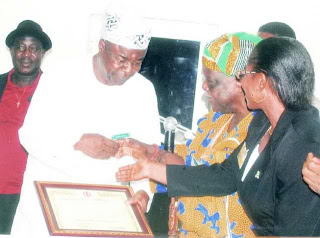 Barely two weeks after an evaluation report rated his Super Story drama series the most watched soap opera in Nigeria, another good news is that the veteran TV producer and the brain behind Wale Adenuga Productions (WAP) has been conferred with the prestigious Universal Peace Federation (UPF) ambassador for peace award 2011.
According to the organizers, the award-winning producer was being bestowed the honour for his outstanding contributions to family values through his TV programmes which include Super Story, ThisLife, Papa Ajasco and many more.
The ambassador for peace is the world's largest and most diverse network for peace leaders from different strata of life.
Other recipients include Babatunde Fowler, Executive Chairman, Lagos State Internal Revenue Service (LIRS), Susan Oyemade of Forever Living products and many others.